Why Don’t Men Have a “Lean In,” and What Does That Tell Us About Women’s Leadership? 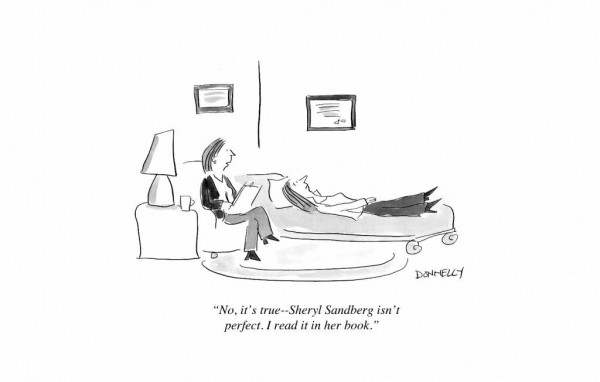 Sheryl Sandberg’s book Lean In: Women, Work, and the Will to Lead quickly became a national best-seller when it appeared in 2013. Almost six years later it continues to feature prominently in debates about gender and leadership—partly because Sandberg also launched a quasi-social movement, Leanin.org, a website that sponsors women’s support circles and publishes an annual study on inequality and sexism in the workplace (no surprise—still a big problem).

Reactions to Sandberg’s ideas remain mixed. Some women look to Lean In as a message of hope and a source of viable strategies for how they can move into leadership positions. But many others have criticized Sandberg for advocating a kind of “corporatist feminism” that encourages women to act more like men if they want to get ahead. The very suggestion that women (but not men) should have to “lean in” points towards a set of systemic power dynamics that will not go away simply because a few ambitious and privileged (mostly white) women get ahead. “Sandberg’s definition of feminism begins and ends with the notion that it’s all about gender equality within the existing social system,” feminist critic Bell Hooks has pointed out in a scathing review of Lean In that is well worth reading. “It almost seems as if Sandberg sees women’s lack of perseverance as more the problem than systemic inequality.”

Scholars working in what is called critical leadership studies can help answer this question. They draw on intellectual sources like critical cultural theory, discourse analysis, feminist and queer studies, and sometimes even Marxist theory to question some of the deep-rooted assumptions behind the ways we talk about leadership. From this perspective, underlying cultural or social expectations often get communicated through language, such as when certain labels apply to some categories but not to others. Bert Spector (2016) explains this concept in relation to leadership: Labels locate individuals and groups within a power and status hierarchy. When we refer to a “black CEO” or a “woman CEO,” our language falls into the same trap. White male CEOs are simply “CEOs,” thought to be “unraced” or “ungendered” and therefore universal. (p. 121)

Because we don’t talk about ‘leadership for men’ or ‘men’s leadership,’ the mere existence of ‘women’s leadership’ highlights how our language subtly assumes all ‘leadership’ is really for men. As a consequence, the ostensibly gender neutral leadership development programs and texts normalize preconceptions about masculine, white, and heterosexual ways of leading under the banner of just ‘good leadership.’

And for these reasons, questioning some of the ways we talk about leadership can help lay a foundation for systemic change that mobilizes both women and men to ‘lean in’ on the effort to co-create more equitable and collaborative forms of leadership.

Written by Nicole Ferry, Assistant Professor and Associate Program Director in the School of Applied Leadership