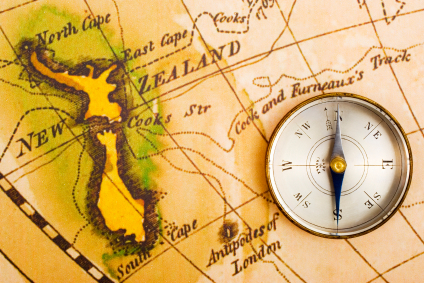 I experienced weekend adventuring at its finest, emphasis on “adventure”, upon taking a weekend trip up north to Gisborne. Gisborne is located on the east coast of the north island of New Zealand and is known for having some of the safest surf in the world (reasonably free of sharks, poison things and scary riptides).

Gisborne is a four-hour bus ride from Napier, over twisting, winding, scenic roads. The New Zealand countryside can be described as hilly, green and teeming with sheep. The hills have mini-terraces running horizontally along their sides as a result of many years of sheep grazing. This pastoral setting is punctuated by lush groves of tree fern, rivers, cliffs  and glimpses of the sea beyond. Scenic and a grand recipe for motion sickness if you choose to sit in the rear of the bus.

The old favorite problem of: “Where will I get a surfboard and how the heck will I transport it from place to place with no car?” reared its ugly head once more in the planning of this mini odyssey. Luckily, I stumbled upon Surfing With Frank in my Lonely Planet New Zealand guide. Frank has boards. Frank has a van. Frank has email. The cost of a board rental, complete with a ride to the beach and return was far less than the cost of purchase of my own vehicle and board in this fair country.

Upon my phone confirmation with Frank, I received a shock. This man has an American accent! As it turns out, Frank hails from California. Much of Frank’s year is spent in the southern hemisphere, surfing the finest that New Zealand’s north island has to offer. When conditions fail or weather is unfavorable, he heads to a location about 1.5 hours north of Zihuatanejo, Mexico to resume surfing. I happen to think Frank has got his priorities in order.

My accommodation for the trip was the Wainui Beach Surf Chalet, a historic building with a fine view (across the street!) of the lovely surf haven of Wainui beach. Cheap lodging, about 20 U.S. dollars per night, can be found here in the form of bunk rooms. To my intense delight, nobody else wanted a bunk room! The first night I shared the large Chalet with a lovely group of four elderly women. The second night, the entire Chalet was mine!

The surf in Gisborne was gentle, glassy and fine quality. The other surfers were plentiful and colorful company. The majority were an older (elderly, even) group of guys. One man was sporting only a bright blue speedo (know as a  “budgie smuggler” in these parts) and another was proudly featuring a wondrous fluorescent pink surf helmet.

The comedic element of the trip entails me being completely and asininely unaware of the rules of surf and accidentally dropping in on our speedo-sporting gentleman and his ten-foot longboard. I was nearly run over but ducked under the wave at precisely the right interval! Afterward the man in the helmet was heard to quip, “He ran me over once and I rather enjoyed it!” Bless their easygoing nature!

The suspense portion of the trip involved  my experience alone in the big, empty, creaky, Surf Chalet. I’ve camped by myself, relished being alone in my own historic home and am generally unafraid of solo-ism. However,  there was a storm. Sideways rain and howling wind can change the mind of even the most determined hermit I soon found!

The silver lining of this storm? The return bus journey to Napier was punctuated by multiple rainbow/cliff/sea vistas. The gold lining was that the storm emerged well after my return to dry land, which allowed me to enjoy a very sunny day in the clear waters.