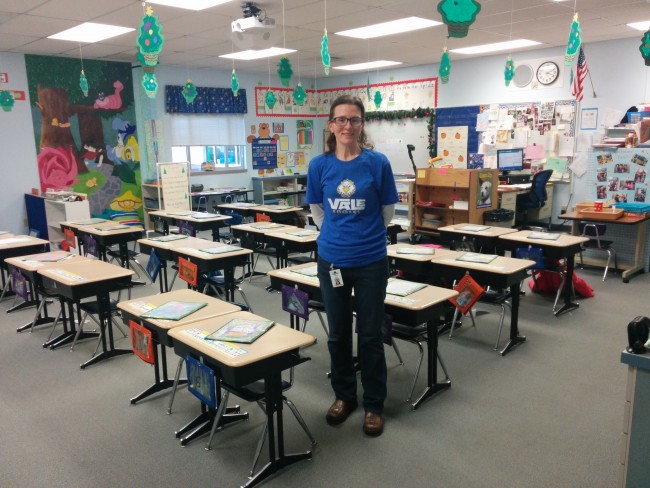 Coming full circle for Shelley Ryan-Kelzenberg means returning to the town she grew up in after being away for 20 years, and also applying her experience as a teacher in Brazil to her new position as a bilingual paraprofessional in Cashmere. Shelley is a candidate in CityU’s Alternative Route to Teacher Certification, and is also getting her English Language Learners Endorsement. Already halfway through the program, Shelley said she really appreciates the Saturday classes because it allows her to work and go to school at the same time. Check out the rest of our conversation with Shelley:

City University of Seattle (CU): Can you tell us a little more about yourself? What do you do in the Cashmere School District?

Shelley Ryan-Kelzenberg (SRK): I was born and raised in Cashmere, and attended school here from kindergarten through 12th grade. But I’ve been gone for 20 years, and just recently moved back. Previously, I worked as a special-ed paraprofessional and I was most recently a music teacher at a bilingual school in Belo Horizonte, Brazil. I currently work as a bilingual paraprofessional in Cashmere, teaching first grade science, as well as writing intervention for English language learners.

SRK: I work in several classrooms, and I love the opportunity to observe so many wonderful teachers. My mentor teacher was my daughter’s first grade teacher last year. The class is 36 percent English language learners. Because of the size of our district, and our district’s philosophy on inclusion, we do not create separate classes for ELL or special-ed students. Our model is “push-in” so there are a lot of paraprofessionals that provide support to students within the classrooms.

CU: What made you decide to enroll in the Alternative Route to Teacher Certification, and the English Language Learners Endorsement at CityU?

SRK: I wanted a one-year program, and I liked the flexibility of the Alternative Route to Teacher Certification. CityU’s program is also significantly less expensive than others I had looked at.

CU: What was something that stood out to you about the certification and endorsement programs?

SRK: The flexibility. I was looking for something that would work for me as a mother, while I was working at school.

CU: What would you say to someone who might be considering the Alternative Route to Teacher Certification or the English Language Learners Endorsement?

SRK: I’ve been actively recruiting paraprofessionals in our district to enroll in the Alternative Route to Teacher Certification. I love that the classes are on Saturdays, and that my advisers are willing to work with me and my principal to find the best fit between my work and the program.

CU: How have you applied what you’ve learned at CityU?

SRK: I’ve had two observations by my field supervisor, who also happens to be my vice principal. He was impressed by the assessments I was using and the way I incorporated the learning targets in my instruction. I learned this as a result of my coursework at City U!

CU: When will you graduate and what are your plans once you’ve obtained your degree?

SRK: I will finish the program in June 2015, and I hope to work as a teacher at Vale Elementary in Cashmere!

Interested in CityU’s Alternative Route to Teacher Certification or English Language Learners Endorsement? To learn more, visit our website, chat with an adviser or email us at info@cityu.edu.