Despite his 20-plus years of experience in the financial industry, Roderick Read struggled to find employment after being laid off from his position in the treasury department at large corporation. Never completing his bachelor’s degree stood in his way of securing full-time work.

“I thought that with my career, salary and status in the international and now domestic community I didn’t need a degree,” Roderick said. “Wake up call! As is often the case in large corporations, politics can blindside anyone.” 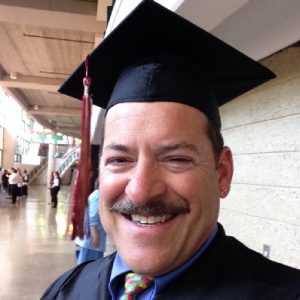 So in 2014 Roderick completed CityU’s Bachelor of Science in Accounting and was subsequently made treasurer of a small manufacturing firm in Illinois. Roderick’s journey to obtain his diploma took him through three schools in two different countries, and was more than 30 years in the making.

After graduating high school, Roderick enrolled at a large university, but found he was treated more like a number than a student and eventually floundered due to a lack of guidance and support. And with high tuition costs, he decided to follow-up on something he’d heard was a good way to make money – working as a stock broker. But, just weeks after passing his broker exam and finding a job selling penny stocks, the market crashed and the effects reverberated throughout his then-home city of Houston.

“If you’ve seen The Wolf of Wall Street you might understand what it was like to be a broker during this time. Luckily, I did very well. But the economy, which had already began to head south in 1984, was beginning to have severe effects on Houston. The only solution seemed to escape, but to where?”

With family in Switzerland, Roderick hopped on a plane to Zurich and quickly found work as a financial analyst at Zurich Citibank. It was then that he saw an ad in a Swiss paper for City University of Seattle, Zurich.

“I decided it was imperative that I finish my degree one way or another, so I signed up for weekend classes at CityU,” he said. “At the time, the Bachelor of Science in Business Administration program seemed logical, so I continued on that path until 1991.”

But facing a medical issue, Roderick put his courses on pause, and by the time he returned to CityU the program requirements had changed. Deciding to halt his studies, he was able to immerse himself at Citibank and saw several promotions during his time there, moving up from corporate account manager, to country risk manager, to electronic banking coordinator. In 1997 he was asked to join Philip Morris/Kraft Foods Group, and stayed with that conglomerate until he was laid off in 2012.

While his unemployment allowed him to focus on finishing his Bachelor’s in Business Administration, Roderick heard from industry headhunters that he would actually need a degree in accounting, finance or economics to continue working in the financial field.

“So instead of graduating in June 2013, I changed my degree to a BS in Accounting, and worked toward completing it as quickly as possible,” he said.

Here’s the rest of our conversation with Roderick:

City University of Seattle (CU): What’s something you really appreciated about the Bachelor of Science in Accounting program?

Roderick Read (RR): I had always been interested in and inquisitive about what I was doing, but was missing a few pieces here and there. The program seemed to offer everything I needed, and I found that most of the instructors were very knowledgeable in the areas in which I had experience. This program prepared me for my current role, and any future role, and gave me the knowledge and understanding I needed in order to properly participate and comprehend all of the procedures, theories, and practices seen in a treasurer’s role, including risk management, financial accounting, cost accounting, auditing, and treasury management.

CU: Would you recommend CityU’s Bachelor of Science in Accounting program?

RR: Most definitely! I found that the program is up to date; the professors are excellent, helpful, and go out of their way in most cases to make sure students have a clear understanding of the material.

CU: Have you been able to apply what you’ve learned at CityU?

RR: Every single day! My current role captures everything I learned at CityU. In large corporations, the treasury departments range in size from five to 30 or more team members. In my current role, I am the only treasury employee, which means I’m responsible for not only all cash management and treasury operations, but also credit, risk management, and corporate real estate. My CityU knowledge allows me to excel in all of these areas, and to use everything I learned at CityU!

CU: Now that you’ve graduated, how have your professional goals changed?

RR: My professional goals remain about the same, but at 50, they might be limited. I am still considering a law degree through a four-year online program, but have not yet reached a conclusion on whether or not this is something I need to do.

Interested in CityU’s Bachelor of Sciencein Accounting? To learn more, visit our website, chat with an adviser or email us at info@cityu.edu.