“I just love that we have Carolyne right here in our ‘class’ as a resource providing such personalized feedback!  This is only my second quarter at CityU and having her input in my previous classes would have helped tremendously in finding accurate and trustworthy sources of information for those papers.” – MK 300 student Christina Weaver, (Business Administration, Information Systems)

What’s in a Source?

When we talk about sources with students, we often ask them to evaluate their sources based on generally accepted criteria, such as: authority, currency, purpose, accuracy, relevance. We may ask students to identify and use a certain type of source – such as primary, secondary, and tertiary – and we may hold one type of source in higher esteem than other types (e.g., “scholarly” vs. “popular”).

Such classifications can become confusing, particularly since a source considered primary in one context or discipline might be considered or used as a secondary source in another. Whereas a requirement to use only peer-reviewed articles might work well for one type of assignment (a master-level research paper, for example), it could hinder a student’s ability to complete another type of assignment (such as a business case analysis).

One thing we do not typically ask our students is how they interpret sources and how they plan to use sources relative to assignment requirements. What happens if we change our approach and emphasize source function or intended use over source classification?

BEAM: A Different Way of Thinking about Sources

In 2008, Joseph Bizup, an English and comparative literature professor at Columbia University, wrote an article about a rhetorical nomenclature he developed for teaching critical reading and research-based writing at the undergraduate level. He calls this approach BEAM, which stands for (B)ackground, (E)xhibit, (A)rgument, and (M)ethods.  The idea behind BEAM is to focus on identifying and describing the role a source has in the context of a particular assignment. In one context, a source may function in a background role, but in another, it may provide fodder for an argument.

Background sources: Used to establish facts or general information germane to the writer’s point, but not meant to be contestable or argued against. For example, biographies or encyclopedia entries which establish facts about a person or concept.

Argument sources: Used to present propositions, refute or accept claims, and further the discussion. For example, scholarly books and articles used by the writer to develop his or her critical analysis.

Adapting BEAM for Use in a Marketing Course

Marketing 300 is a class that many students take at the beginning of their academic career at CityU. It is mapped to CityU Learning Goal (CULG) 3, which says: “CityU graduates are able to think critically and to reflect upon their own work and the larger context in which it takes place. They are able to find, access, evaluate, and use information in order to solve problems. They consider the complex implications of actions they take and decisions they make.”

When looking at assessments of student work, Academic Program Director Corrine Holden observed that the information literacy learning goal (CityU Learning Goal 3) had a low score compared to others. The BEAM method enables students to learn to evaluate their sources in a larger context as required by this learning goal.

In collaboration with faculty, the librarian for the class, Carolyne Begin, adapted the BEAM method to the major assignment in the class (the marketing plan). The activity is designed to get students to think about their sources and why they are relevant to a professional marketing plan. Six weeks of discussion board activities were designed to help students accomplish this task. At the end of the six weeks, the students will have enough sources to complete a marketing plan. The discussion boards are moderated and graded by the librarian and are supported by handouts and announcements to help students create a relationship with the library.

Next steps: Carolyne and Corrine spoke with SOM faculty about expanding BEAM’s reach to more courses, as well as plans to provide guidance/training to faculty who want to embed BEAM methods (since it is not feasible for Carolyne to work with every course that might adopt BEAM methods).

What Instructors Say about BEAM and Librarian Support

Cyndi Meuchel, MK 300 instructor, says that using BEAM has improved student work: “My experience has been that the quality of the work submitted by students after incorporating the library discussions/activities has been quite apparent. … They are able to substantiate themselves in a powerful way with appropriate resources thanks to these activities. The result is students who have a MUCH stronger grasp of how to gather and use resources. I highly recommend incorporating this concept into other courses. Additionally, it could be a great differentiator for CityU.”

Tee Nearman, MK 300 instructor, notes that she has “seen significant improvement in the final product (marketing plan assignment) for the course as a result of sharing the detail the librarians have incorporated in to this course. … I would like to see this process incorporated in to all undergraduate courses that are taken early in a student’s university learning.  This would ensure or at best, give them (the students) a better foundation when thinking critically and writing appropriately.” 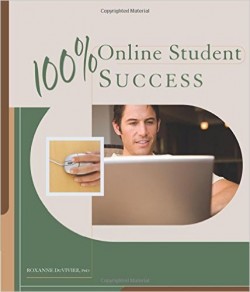 Review by Theresa Gehrig, Instruction Librarian What are the characteristics of a successful online student? ...

Review by Jennifer Bodley, Instruction Librarian What is the difference between online learning and mobile...

Review by Albert D. Ybarra, Librarian Why does the smell of cinnamon make a heating...