Programs in Mexico Continue to Grow 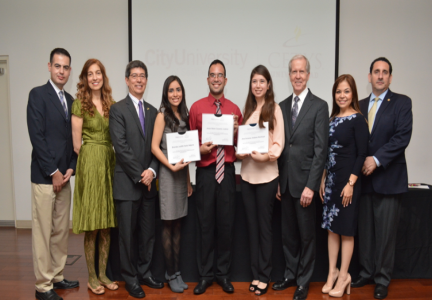 City University of Seattle’s programs in Mexico continue to grow as well as the relationships with its four Mexican partners. Recently, President Richard Carter and Provost Dr. Steven Olswang visited CityU’s sites in Mexico to foster these partnerships. Below is a brief summary of each visit.

CityU and CETYS have offered educational programs in Mexico since 2005. The partnership has blossomed to include CityU programs at the undergraduate, graduate, and doctoral level. President Carter’s visit to CETYS was conducive  to the launch of the undergraduate and Graduate Program Management Certificates and to award three Presidential Scholarships.

In collaboration with CETYS, both institutions offer three Presidential Scholarships — one per CETYS site — to students in CityU programs who demonstrate academic merit and need. and volunteer at CityU. This year, CityU’s Presidential Scholars are Ana Dolores Aldana Montoya (Mexicali), Brenda Judith Solís Nájera (Tijuana) and Jesús René Cázares Juárez (Ensenada). President Carter with his counterpart, and former CityU staff member, President Fernando León García handed out the scholarships to the deserving students in front of their classmates and proud parents. Congratulations to all!

CityU announced the launch of the Bachelor of Arts in Applied Psychology (BAAP) in partnership with the School of Psychology at
Universidad Autónoma de Nuevo León (UANL). Provost Olswang and Assistant Provost Antonio Esqueda met with the school’s leadership team and presented the project to students.  This summer, CityU will host BAAP students from Tijuana, Mexicali, Monterrey, and Puebla.

The School of Business (FACPYA for its Spanish acronym) at UANL, CityU’s first partner in Monterrey, and CityU announced the hiring of one of its alum of the double degree in business administration, Juan Adame as the new CityU Program Coordinator in Monterrey! Juan will be responsible for CityU’s Bachelor of Science in Business administration, Bachelor of Science in Accounting, and Master of Business Administration.  He also volunteered to help kick-start the BAAP! 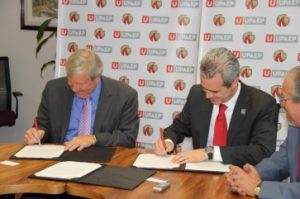 Dr. Steven Olswang and UPAEP’s President Jose Emilio Baños Ardavin signed an updated articulation agreement and formally launched a Bachelor of Arts in Applied Psychology (BAAP) program in Puebla. With this new program, CityU now offers four educational programs in partnership with UPAEP.  Additionally, CityU met with the Provost for Graduate Programs. The meeting was highly successful and Dr. Kurt Kirstein, Dean, of CityU’s School of Management, will follow up with UPAEP in his trip to Puebla later this month. Dean Kirstein was invited to teach a course on sustainability.