From Hanoi to Seattle: New international student is proud to call CityU home

Moving halfway around the world to study in a new country with a different language is a big step. For many students, the questions they have about the transition can be daunting: Will I get a good education? Is it safe? How will I make friends?

To help address some of these questions, we asked a new City University of Seattle international student to share what his experiences at CityU and in Seattle have been like so far.

A tale of two cities 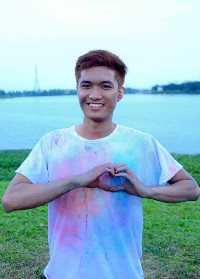 Nguyen Ba Nguyen, recently moved from the busy capitol city of Vietnam, Hanoi, to Seattle to study in the MBA program at CityU.

“I found out about CityU by talking with a representative from the school and then looked at the website,” Nguyen said. “I was interested because of the percentage of international students [at the school], and I wanted to be in an urban area.”

The transition from one city to another has been relatively smooth for Nguyen, but he’s observed some differences between the two.

“Seattle is beautiful,” Nguyen said. “The city isn’t huge, and it’s very walkable. It can sometimes get crowded. I’ve been in traffic jams here, but they’re not as bad as at home. Crossing the roads is safe,” he laughed.

One of his favorite things to do is walk around and take in the sights and sounds of the city.

“Seattle is near the water, and I like to watch the ferry boats,” Nguyen said. “And the Space Needle.”

In fact, the Space Needle has become his study buddy of sorts.

“The 20th floor in CityU’s residence hall is my favorite place to study,” Nguyen said. “I like to look out at the Space Needle at night when I study or watch movies.”

Life as an MBA student

Nguyen has plenty to study. As a new MBA student, he is taking two classes his first quarter.

“My teachers are very experienced, and they motivate me to study, explore and do research,” Nguyen said. “I thought it was going to be more difficult, but it’s not been so difficult because I’ve been able to adapt.”

One of the things he enjoys most about his classes at CityU is the opportunity to develop his presentation skills.

“In Vietnam, I didn’t have chances to present,” Nguyen said. “In one of my classes we get to present every day on a different topic. One day we presented on how people communicate in different cultures, and we didn’t have a chance to prepare – we just got up in front and presented.”

He sees the opportunity to learn from classmates who come from different cultures as a benefit as well.

“I have classmates from Vietnam, India, China and America,” Nguyen said. “I get to learn how they work and how they express their ideas.”

Getting to know his peers has provided a social outlet for him as well.

“The first couple of weeks here were a little lonely, but now I’ve met people and have fun with my classmates,” Nguyen said.

He has also joined the student organization Enactus and is meeting people through it.

“I was planning on studying human resources management, but now I am thinking about changing to project management,” Nguyen said.

At home in Seattle

After only a few weeks in Seattle, Nguyen is feeling at home and has begun to envision his future here.

“I want to get an internship, and eventually a job at Amazon or Boeing,” Nguyen said. “That is my future goal.”

If all goes according to plan, it’s possible that Nguyen’s big move across the ocean for school may’ve just been the start of his life in the Pacific Northwest.