Brendan Osburn’s family has a tradition of working in law enforcement and public service, and from a young age, he knew that is was what he wanted to do too.

“I enjoy making sure that laws are enforced, and helping others that can’t help themselves,” Brendan said. “It’s about making sure no one is made a victim, and defending the public.”

After earning his associate degree, Brendan got his start working for the Washington State Department of Corrections, but soon realized he’d need additional education to advance in his career. When his wife, a City University of Seattle alumna, received an email saying the university was now offering a Bachelor of Science in Criminal Justice, he decided to look into it.

“I was more than pleased with every interaction I had with [Program Director] Dr. Sainato,” Brendan said. “He sat on the phone and we talked and went over past experiences, and he helped me pick the right path I needed to go down for my degree. I jumped on it.”

Brendan enrolled in the Bachelor of Science in Criminal Justice with a Justice Administration Emphasis. Due to his busy work schedule, he chose to complete his degree online.

“It was very convenient because I was able to fit the online schedule around my corrections schedule,” Brendan said. “I had a lot of mandatory overtime so going to in-person classes was out of the question. Being able to study on my down time or even at work made it possible. Without those online classes, I don’t know if I’d have been able to get it done.”

Even though he was studying online, Brendan was still able to develop strong connections with faculty members.

“The professors were more than willing to help you out if you were in a tight sport or had something going on in your personal life,” Brendan said. “The smaller class sizes really make that possible. Unlike large universities, you actually get to know the professors and they know and remember you. I absolutely loved it.”

Brendan graduated from the program in June 2017, and has been asked to fill multiple acting sergeant positions within the Department of Corrections.

“I eventually want to test out different departments like the Department of Fish & Wildlife, or the Sheriff’s Office, or use the administration emphasis to promote up within the Department of Corrections,” Brendan said. “I don’t want to remain a beat cop, I’d like to get in and make a change within the administration – review policies and look at what could be improved.”

He’s happy with the experience he had at CityU, and feels like it’s given him what he needs to move forward in his career.

“I’ve recommended CityU’s program to a couple of the Officers who’ve been looking to further their careers like I have,” Brendan said. “I’ve recommended Dr. Sainato and the program I went through with the three different routes. I told them there are plenty of options, whether you want to go one way or another. It’s not a blanket degree, you can specialize it. There are small class sizes, and everyone was supportive. There was no rush to cram classes in, you can take it at your own pace without having jam them in and become overwhelmed.”

Learn more about CityU’s Bachelor of Science in Criminal Justice online, or by requesting more information. 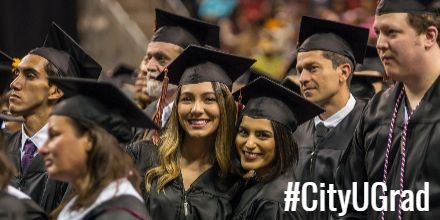