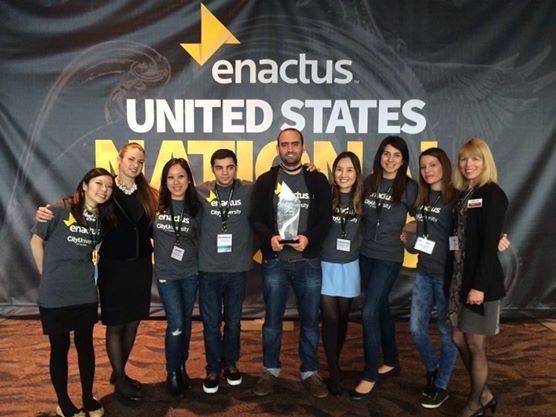 With 35 members from 15 different countries, the team send a smaller contingent to Ohio, and blended talent and insight on their way to the third place trophy. They were one of over 550 teams nationwide, and part of 200 that competed at the national competition. Oregon State University and Seattle University also shared third place with CityU.

“This is the best result we’ve had since the our program’s first team in 2004,” said Kathy Cox, Program Director at CityU and coach of the team.

In addition to this outstanding accomplishment, CityU’s Enactus team has  worked on several large projects this year:  they helped Millionair Club members secure full-time jobs, partnered with Seattle Tilth to help teach foster youth the basics of starting a business, and worked with CityU’s Sustainability team to promote several Sustainability projects over the course of the year.

If you have any questions, or would like more information on the Enactus Team, contact Monika Petrova.

Enactus would like to recognize all of its members for their contributions this year. Participants in this year’s competition have an asterisk by their name: