City University of Seattle students come from all walks of life, with different obstacles and goals for each of them, but being the first one in a person’s family to go to college can set an entirely different kind of barrier. However, for Macuilxochitl (Xochitl) Palacios, those obstacles weren’t going to stand in her way. “I am the 8th child in a big family that moved around a lot, which means growing up, we didn’t really focus on school and in the 90’s I was raised in an unsafe neighborhood where only 1% made it through the obstacles and got out.” 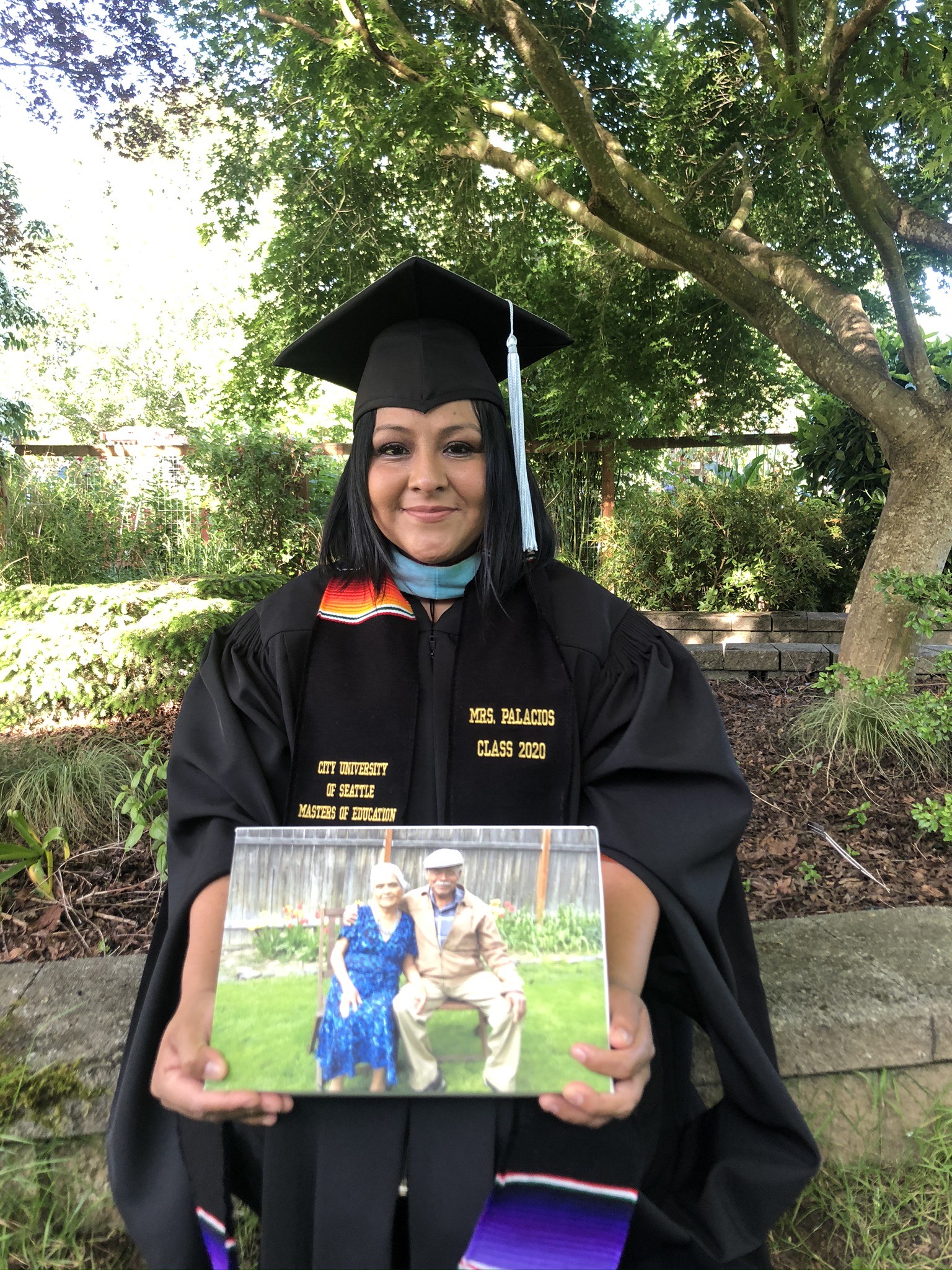 Once Xochitl was on her own, she decided to put her education and her career first.  Xochitl said, “After being in that community, I wanted to protect the people I grew up around, so I got my BA in Criminology and Justice Studies, but I couldn’t join the police force because of medical issues.” Another obstacle wasn’t going to stand in the way of Xochitl reaching her goals. It only gave her the opportunity to redirect her goals, and she started focusing on her family and the next generation of leaders. “I was a preschool teacher for some time after the (police) academy, and I couldn’t let go of teaching. I decided to move to Washington state and continue teaching,” Xochitl said.

After the move and finding a teaching job, Xochitl needed to go back to school to continue teaching. “I heard about CityU through one of my mentors,” Xochitl said. “I didn’t have a teacher’s certificate, and I knew I wanted to get my masters instead of just a certificate.” Once she started her classes at CityU, Xochitl noticed that this place was different than her previous education institutes. “I never had anyone model for me what school should be like. I didn’t think I was smart enough to do it, and after one class, I knew it would be a great experience.  At that point, I never had a hands-on teacher before, and the way she spoke and inspired us to write was what I needed to succeed. I kept thinking, ‘I wish growing up. I had an education model like this,’” Xochitl said.

Going back to school can be stressful for some people, but Xochitl knew she wanted to finish her degree, despite additional obstacles. “I had a minor stroke last year – Between teaching, raising two kids, and going to school full time, I had a great support team of professors and advisors who worked with me. I didn’t have to miss a quarter, and I recuperated in half the time the doctors thought I would – I think it’s what pushed me to continue forward and strive for more.”

Through her program, Xochitl grew and learned from her professors, and was able to apply new ways of thinking to her diverse classroom. “My philosophy is that we can achieve relationships by building trust and being empathetic by knowing the whole child. Understanding the whole child means understanding their hardship and even being in their shoes by knowing their world, their community, and their Native language and at least attempting to build trust,” Xochitl said.

Now that Xochitl is in the final quarter of her program, her experience at CityU has impacted her more than she ever expected. “It is because of my parents that today I stand proud, on their shoulders, reaching my dreams without losing my groundings, in culture, traditions, language, and humbleness. I never imagined I would get a 4.0, but I did, and I feel like the mindset that CityU brings is encouraging, and the diversity is what is amazing, and they pushed us forward to completing our degrees,” Xochitl said.

As the new school year begins, Xochitl is taking her experience at CityU and bringing it into her classroom so that her students get the same support that she does. “I want to continue to empower my students to self-identify without losing their cultures or their selves. Believing in students just like CityU gave me the opportunity and guidance to be successful in education is something I will continue in my teachings,” Xochitl said.

If you are considering getting your Masters in Education, Xochitl advises you to “Go for it! One thing at CityU is they get to know you and will do anything to help you finish – they strive for education and making it purposeful.”

Visit CityU.edu to learn more about CityU’s Master of Education in Curriculum and Instruction program.

Xochitl Palacios Profile: first-generation student, the eighth child, and only to graduate with a master’s degree in her family. Xochitl’s background is Mexican indigenous. Her parents migrated in to farm work, back in California in the 1980’s (when the Bracero Program was first founded in the 1940s her grandparents were some of the first people to join the program). As a family, they migrated to the United States with visas that were given to farmworkers, and Xochitl became a migrant child at the age of two.