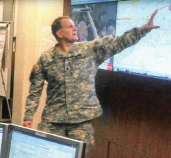 Army Reserve Lt. Col David Yasenchock (MBA ’94) serves as Massachusetts Emergency Preparedness Liaison Officer (EPLO) and was one of the first to receive the call that he was needed to coordinate Department of Defense response to the Boston Marathon attack. He was in the joint operations center when the bombing suspect was captured.

Lt. Col Yasenchock was recently featured in Warrior-Citizen magazine, the official magazine of the U.S. Army Reserve on page 8.

Yasenchock is 1994 graduate of CityU’s MBA program in Technology and Engineering Management. He served on Active Duty from 1990-1994 and been with the Army Reserve from 1995 to current. His current civilian employment is CIO of the City of Rochester/SAU54 of Rochester, NH.

In addition to his current assignment Yasenchock has worked in the Pentagon to support the opening of Operation Iraqi Freedom in the “War Room” of the Army Operations Center. He also assisted in the training of the new Iraqi military and commanded a logistics unit to support operations in Afghanistan.

He is currently waiting for a date for his Doctoral Dissertation Defense from NCU in Computer and Information Security.

Thank you Lt. Col Yasenchock for your service and congratulations on your success!