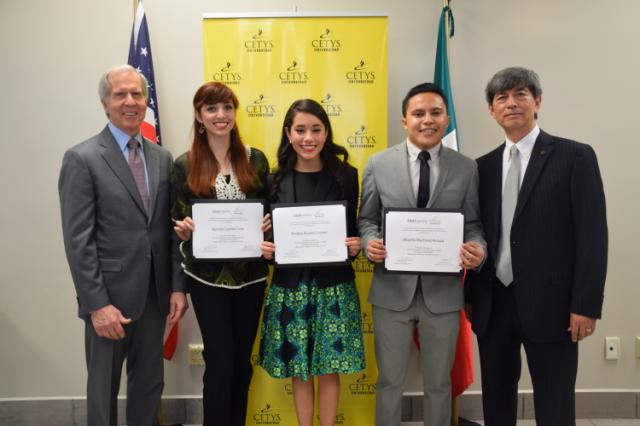 City University of Seattle and its partner in Baja California, Mexico – CETYS Universidad – celebrated the recipients of the 2016 Annual CETYS-CityU Presidential Scholarship. The ceremony was held in CETYS’ Tijuana campus and was attended by CityU’s President Richard Carter and CETYS’ Rector Fernando León García.

The academic collaboration between CETYS Universidad and City University of Seattle started in 2005. Today, the academic programs that are offered in a double degree format have their 11th Business Administration cohort, its 7th Engineering/Management cohort, and its 5th Psychology cohorts.  In total, more than 200 students are enrolled in the program with 100 students scheduled to graduate in June. The partnership between CETYS and CityU is one that encompasses innovation, prepares students for the regional and global challenges, and strongly contributes to the internationalization of both institutions.

Congratulations to the 2016 Presidential Scholarships recipients: 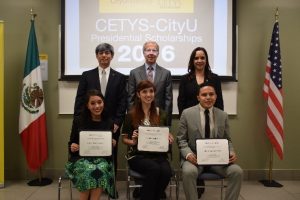 President Carter stated that the “double degree program is an American Council on Education model program.  We continue to strive for excellence in our educational offering. And based on CityU’s 2015 Student Engagement Survey of CityU’s students in Mexico, including those at CETYS, 96% stated their educational program met the University’s Learning Goals.”  Similarly, the ceremony student speaker, Andrea Alvarez, stated the double degree program “has opened my mind to new global perspectives; I have gained lots of special lifelong friends; I traveled to Seattle; the program allowed me and my classmates to have excellent professors from whom I have learned a lot, not only from the course they teach, but from who they are.”

The 2017 Presidential Scholarship application will be available in the fall of 2016. Check your CityU email for further information or contact your local program coordinator.