CityU Celebrates its 40th by Giving Back 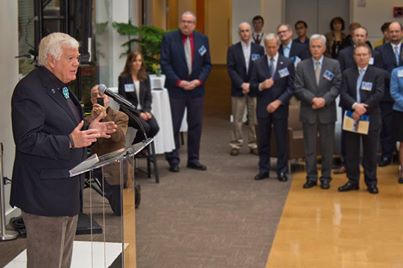 City University of Seattle celebrated its 40th Anniversary on Friday, November 8, with a 300 person event highlighting its recently announced $100,000 scholarship fund for transitioning Veterans who call Washington State their home.

The event was kicked off by the 56 Army Band I Corps; I Corps Command Honor Guard from Joint Base Lewis McChord presenting the Colors; and Seattle’s Josephine Howell singing a powerful rendition of our National Anthem. It also featured comments from Congressman Jim McDermott; Congressman Adam Smith; Alumnus and executive director of KEXP Tom Mara; and CityU President Carter. Each touched on the importance of growing our support to the men and women of the armed forces as they transition back to civilian life. Comments also included a special letter from Governor Inslee, which thanked CityU for responding to his executive order regarding transitioning veterans and acknowledged CityU as a leader in innovative education. A special 40th video was also presented. You can see the video here.

Here are some special images from the event. For more, you can go here.

Thank you all for joining us and for helping us celebrate this special day.