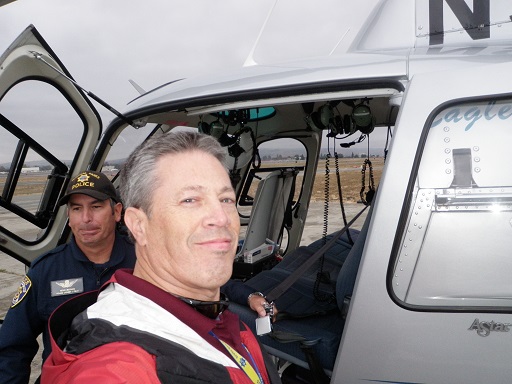 Recently we caught up with Russell Sonmore, a graduate of CityU’s Bachelor of Science in Business Administration. Here is what he had to say about his experience at CityU and what he is doing now.

City University of Seattle (CU): What program did you graduate from and when?

Russell Sonmore (RS): I graduated in 1996 with a BS in Business Administration along with completing a Certificate in Personnel Management. During my program, I was injured on a job assignment in which CityU accommodated me. This allowed completion of my undergraduate degree through Distance Learning to include the use of Proctors for exams during times when I was limited in mobility.  I am very thankful for CityU’s instructors whose flexibility significantly contributed to furthering my education which subsequently led to my career advancement.  Once my health returned I was able to resume a productive career eventually leading into Homeland Security/Emergency Management and also into the Washington State Guard as a Military Commissioned Warrant Officer.

CU: What were some important things you learned in that program and how are you using it today?

RS: I enjoyed all the courses I took while at CityU and cannot underscore enough the Written Communications, Business Math, and Contract Law courses I took as they were key in helping me at opportune times in my career positively affecting a chance to accept a new position in 2002 that former Governor Gary Locke executively directed. It was this opportunity that gave me unique experience which paved a path into another exciting position later with Homeland Security/Emergency Management.

CU: What has been your career path since CityU? Do you think your degree helped you move along this path?

RS: CityU allowed me to obtain credit for a variety of Behavioral Modification and Psych classes I had taken from several colleges which gave me a Social Services platform in my undergrad degree.  Therefore as I completed my degree at CityU, I promoted from a position in Developmental Disabilities to working as a Child Welfare Social Worker requiring a college degree. These gave me a chance to directly benefit the mission of the Department of Social and Health Services, specifically its goal in protecting vulnerable people and understanding the complexities associated in social economics.  Simultaneously, as a grassroots effort, I linked to the McDonald’s Corporation by making presentations (which I learned to create and target while studying at CityU) to owners and the corporation over the gaps I encountered in working with abused and neglected children. McDonald’s graciously opened their doors and under their Helping Hands program launched into providing meals to children living in neglected situations. McDonalds received an award by former Governor Gary Locke and I received several honors including Employee of the Year in 1997. This drew a lot of attention and led me into promotions and new occupations with state government. I credit CityU for teaching me how to assess and develop critical business plans. The program has continued to benefit children across 35 cities.

CU: We understand you work with Veterans. What does that work look like?

RS: Prior to attending CityU I worked in the Department of Veteran Affairs for a number of years which gave me a passion to assist veterans.  Years later, through my Emergency Management deployments, I began to work alongside National and State Guard soldiers. In 2009, I was invited to enlist into the Washington State Guard and after having my education evaluated my degree from CityU allowed to me be accepted as a candidate for a year of Officer’s school. Today I serve in a number of capacities within the State Guard with a focus on Emergency Management.  I also enjoy the overlap this has provided me with veterans form all Military disciplines who continue to step up and advise and support our military.  It’s a privilege to serve.

CU: Is there anything else you’d like to add?

RS: I recognize that without the flexibility of CityU while I was injured my education would have been postponed and perhaps not continued.  Having this degree and investing in myself in this way has greatly impacted my life and those close to me. My education has allowed me to travel throughout the United States, work with high ranking officials, and continue to serve in capacities I never imagined while having my nose down in a CityU book back when…

Thank you Russell for filling us in on your life and your success. All our best to you and our other graduates.

Interested in CityU’s Bachelor’s in Business Administration? To learn more, visit our website, chat with an adviser or email us at info@cityu.edu.