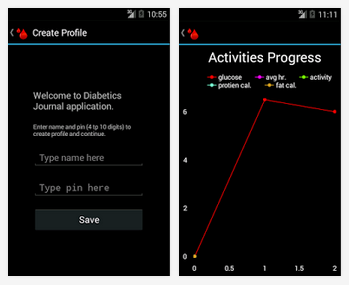 Keeping the classroom innovative, City University of Seattle instructor Ann Robinson challenged her group of Technology Institute students to “think outside the box.” As part of their capstone courses to complete their bachelor’s degrees in technology, Ann’s students designed, tested and produced the app Diabetics Journal.

“Thinking outside of the box is crucial in today’s world of dynamic technology,” Ann said. “You have to think of things people haven’t done before. This really gives us a chance to say, ‘Look what CityU is doing.’”

While there are plenty of other diabetes-related apps on the market, the Diabetics Journal is different because it does more than simply store inputted data—it actually interacts with the user.

Inspired by a friend who would often forget to measure his blood sugar, Ann had the idea for an app that would not only retain data on glucose levels and calories consumed, but also alert someone when it was time to eat and test blood sugar levels. She proposed the idea to her students and they set to work deciding roles and creating a prototype. In the second phase they began building code and testing.

As a software developer lead at Microsoft, Anil Revuru took up the role of developer/architect and began researching how to build the app, store data and publish the product. Also included in the final team were Jose Cosme, who served as the project manager, and Leonard Mixon, who was the tester.

“This was my first time doing anything like this, and it was just amazing,” he said. “The amount I learned was astounding. My background in technology helped me understand the jargon, but when it came down to execution, I really had to learn a lot of new concepts.”

Anil, who is expected to graduate this year, said his CityU courses on C# (sharp) were especially helpful for coding the app. Even with years of experience in the field of technology, Anil decided to enroll in CityU’s Bachelor’s of Computer Systems.

“From day one I’ve been interested in computers, and I was already working in technology when I came to CityU,” Anil said. “In doing this program I was able to refresh things I already knew, and I learned things I didn’t know – especially Android app publishing and C++ code.”

Anil said he appreciated his final capstone project of building the Diabetics Journal because he learned and developed practical skills, and was able to create a tool that will help others.

“The people I work with see the value in what I’ve done,” he said. “And it’s an important problem that we’re solving. The app will have an impact on people who use it.”

Looking back on the project, Anil said the process was really a team effort, and the app couldn’t have been built by just one person.

“The whole team has done a great job,” he said.

Interested in CityU’s technology degrees? To learn more, visit our Technology Institute web page, chat with an adviser or email us at info@cityu.edu.