A Journey to Illustrate Why Accurate APA Citations Matter 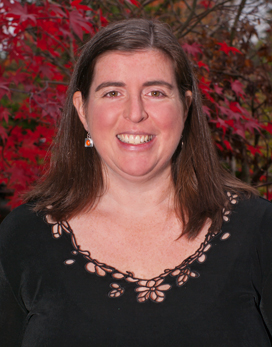 I want to take you on a journey that really points out how important APA is and why it matters.  The beginning of my journey started a couple of years ago when I was researching a paper idea that I had been tossing around in my head for about a year previous to that.  I needed a theoretical framework to help me ground it.  I knew that somewhere in the Inclusive Education or Universal Design literature, I would find what I was looking for. So I started conducting a literature review.

Within a few articles, I found what I was looking for!!  A well detailed description of Universal Design of Instruction framed and articulated in a way that would fit my writing.

The citation clearly reads (Cunningham, Souma, & Holman, 2008, p. 338).  I wanted to avoid an “as cited by” in my paper, since those are never as reliable as going to the primary source.  Boy was I right about the “unreliability” of this citation! I looked at the reference list in this article for the citation for Cunningham and friends.  Here’s what I found.

It turns out this book is available for download, so a minute later, I was in business…. Except I wasn’t. When I found the Cunningham, Souma & Holman article in Higbee and Goff, they attributed the UDI list to others:

Now I’m even more confused, is this a Chickering and Gamson list or a Johnson and Fox list? [Missing commas really do create confusion].  Moving along, it read to me like Johnson and Fox, so I followed that lead first…

The book was easy to find, as it was by the same editors as above, and downloadable from the same website.  I read the Johnson and Fox chapter from end to end and couldn’t find the citation.  Nor did they cite Chickering and Gamson in their reference list.  Something was wrong.  This was a dead end.

So next I looked for Chickering and Gamson. I quickly found an article that they published in 1999 that discussed how they had come up with the Seven Principles for Good Practice in Undergraduate Teaching that were published by the American Association for Higher Education in the 80’s.  This list is similar to the one I wanted to use above, but it isn’t the same list, and it lacks some fundamental items that I wanted to include.

I put my thinking cap on…. I did not want to perpetuate this string of poor citations, that was why I was going back to the primary source to begin with. So I needed to find the original list, and cite it accurately.  But where could it be?

At this point, I traced my footsteps back a little.  Since the Johnson and Fox citation was a chapter in a book, I decided to check out the rest of the book for more clues.  The whole book was on the right topic, and I happen to know that the miss-citing authors and the project leaders on that book know each other.  I use the search function in Adobe to search the whole book to find a unique string of words from the list, realizing the authors must have read the list in that book and just wrongly attributed it.

And with the search, I found this: 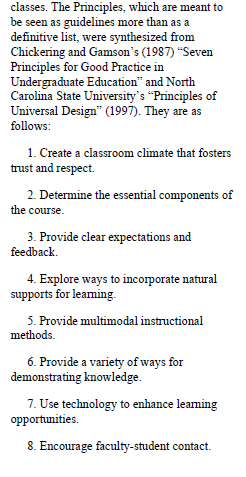 Now that is what I was looking for!  It turns out it was in the next chapter.  So, Cunningham, Souma & Holman wrongly credited Johnson and Fox (2003) in their discussion of the synthesis.  Instead, all they needed to do was to cite “Fox, Hatfield and Collins’ (2003) synthesis of Chickering and Gamson’s and North Carolina State University’s principles” (which is awkward).  Or they could have just said “Fox, Hatfield and Collins (2003) synthesized a list from different sources that…..”.  While the list came from different sources, the synthesis was entirely the authors so they can be cited without have to drill down to the original works.  The reference for the citation is below.

Through this journey, I hope I have illustrated how even published authors make mistakes.  As a researcher, you should always check your sources back to the original work to make sure your paper doesn’t copy the errors of others.  This journey also shows how important APA is to help you track down sources.  It was easy for me using the reference list to see exactly what the authors saw and, ultimately, to see what they did wrong.  Thus, I avoided plagiarism a significant end to this journey.