A hero, change agent and poet in our midst: the many faces of Carlos Lazo 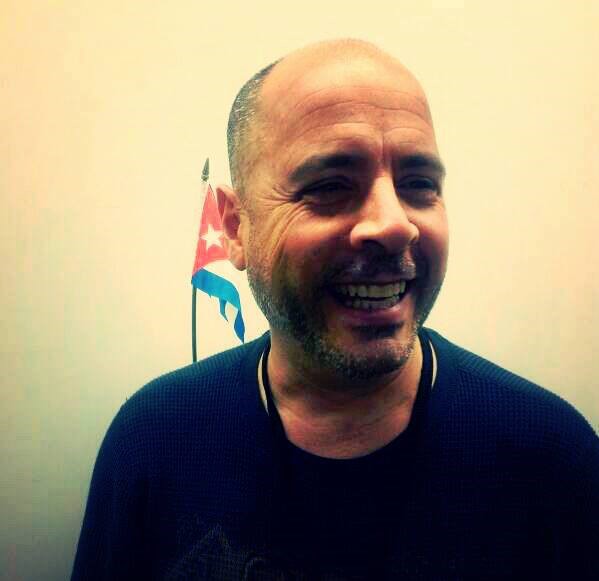 In the waves of the Atlantic Ocean in October, 1991, Carlos Lazo spent four days on a raft, escaping Cuba to join his family in America. On the fifth day, after seeing sharks, fighting hunger and feeling immense fear, Carlos was rescued by the US Coast Guard and entered the United States for the first time. This is one side of Carlos Lazo – an intrepid, resolute Cuban immigrant balancing precariously on a raft, leaving his home country to follow his dream of a better life, and stopping at nothing to achieve it.

The other side of Carlos is that of an educator and lifelong learner.

As a doctoral student in the School of Applied Leadership, Carlos is researching social justice issues and is determined to find solutions to transform our educational system and communities. Carlos is working toward his doctoral degree in Specialized Study under the guidance of Associate Program Director, Dr. Joel Domingo.  Carlos’s goal is to create equitable educational opportunities in the lives of immigrant youth and minorities:

All of my past experiences and my current career as an educator has resulted in my profound interest in researching the topic of fairness in education. I know firsthand – as a Latino and as a teacher – how the opportunities, or lack of opportunities, in schooling can impact the lives of young immigrants and minorities.

An immigrant’s experience, gratitude, and the effects of war

In his early days in the US, Carlos found employment as a waiter, pizza delivery driver, and truck driver. He took technical classes at a community college, became a licensed mental health technician and worked in programs that assisted the elderly. In 1998, seven years after being rescued by the Coast Guard, Carlos moved from Miami to Seattle. As a way to show his gratitude for opportunities he found in the US, Carlos joined the Washington National Guard and became a combat medic.

He was sent to the Iraq war in 2003 and fought in the battle of Fallujah. For his actions in combat – providing medical care to the troops and saving lives of Marines and Iraqi civilians – Carlos was awarded the Bronze Star Medal.  The war touched Carlos deeply:

When I have seen innocent children dead in the battlefields, I perceive the eyes of my own children in their motionless faces. I discovered that I have the responsibility to share my experiences with others to prevent those horrors from happening again. I also learned that every act of kindness, love, and compassion, performed toward others, creates lasting and marvelous repercussions in our lives, in our communities, and in the world.

A battle of a different sort

After the war, Carlos came home and faced another battle: the US government had implemented new restrictions preventing Cuban-Americans from traveling to Cuba to visit their families, which incensed Carlos. He became a political activist and lifting the restrictions became his personal, yet public, battle. He wrote newspapers articles, traveled across the country, and spoke out on television programs to share his message that the restrictions were unjust and undemocratic.

Carlos met more than one hundred fifty members of Congress, and in December 2007, he testified in the Senate. Eventually he was able to bring his two sons to the United States.  And in 2011, for just the third time since the 1963 missile crisis, travel restrictions were changed to allow Americans to visit Cuba. Since the modifications, Carlos has visited Cuba several times. Carlos was interviewed by CNN about his political activism. The video can be viewed from the link below:

From activism to teaching

Since his childhood, Carlos knew he wanted to be a teacher. More than twenty years after graduating from a Cuban high school, Carlos earned an associate’s degree at Shoreline Community College while working full-time. He transferred to the University of Washington and obtained a double bachelor’s degree in Latin American Studies and Spanish, with a minor in Anthropology. Carlos was on the Dean’s list every quarter, and graduated, cum laude, with honors in Spanish in 2011.  Following graduation, he entered the Master in Hispanics studies program and completed both a Master in Hispanic Culture and a Master in Teaching in June, 2014. Currently Carlos teaches middle school Spanish.

In addition to being a doctoral student, educator, activist and war hero, Carlos writes like a poet:

My name is Carlos Lazo. I am fifty-one years old and I have had a challenging and beautiful life.  I am the son of a cigar maker and a housewife. I grew up in Cuba, where there were no amusement parks, but I had a happy childhood. I used to run free, every morning, to the nearby beach and swim for the whole day, worriless. I had no TV.  That compelled me to spend part of my childhood in the local library, devouring adventure books. Since those early years I developed an immense love for learning and literature.

Carlos has been inspired by the quote often attributed to Gandhi: “Be the change you wish to see.” This quote expresses the notion that we should not wait for change, or for conditions to improve on their own. Instead every individual must undertake social action to make the world just and humane for all.  His advice for students is to keep working hard in what you love and keep studying, for knowledge and learning frees us and make us better people.

If we keep working for positive change in our own lives, says Carlos, eventually that positive change is going to transcend and have an impact on the welfare of our families, our communities, and the world.  My life in Cuba, in the United States, and in the Middle East has enriched me and made me a global citizen who understands and celebrates diversity. I learned, after all my traveling around the world, that people are bonded by their humanity.

We are honored to have Carlos in our doctoral program and to be a part of his continuing educational journey.